[May, 2015] DIMACS will welcome students participating in the 2015 Research Experiences for Undergraduates (REU) program on June 1, and it looks like the students from the 2014 program left them big shoes to fill. During the past year, the 2014 REU students have co-authored 13 papers, given 13 conference talks, and presented many more posters describing their research. In anticipation of the 2015 program, we highlight a few of the results from the 2014 group. 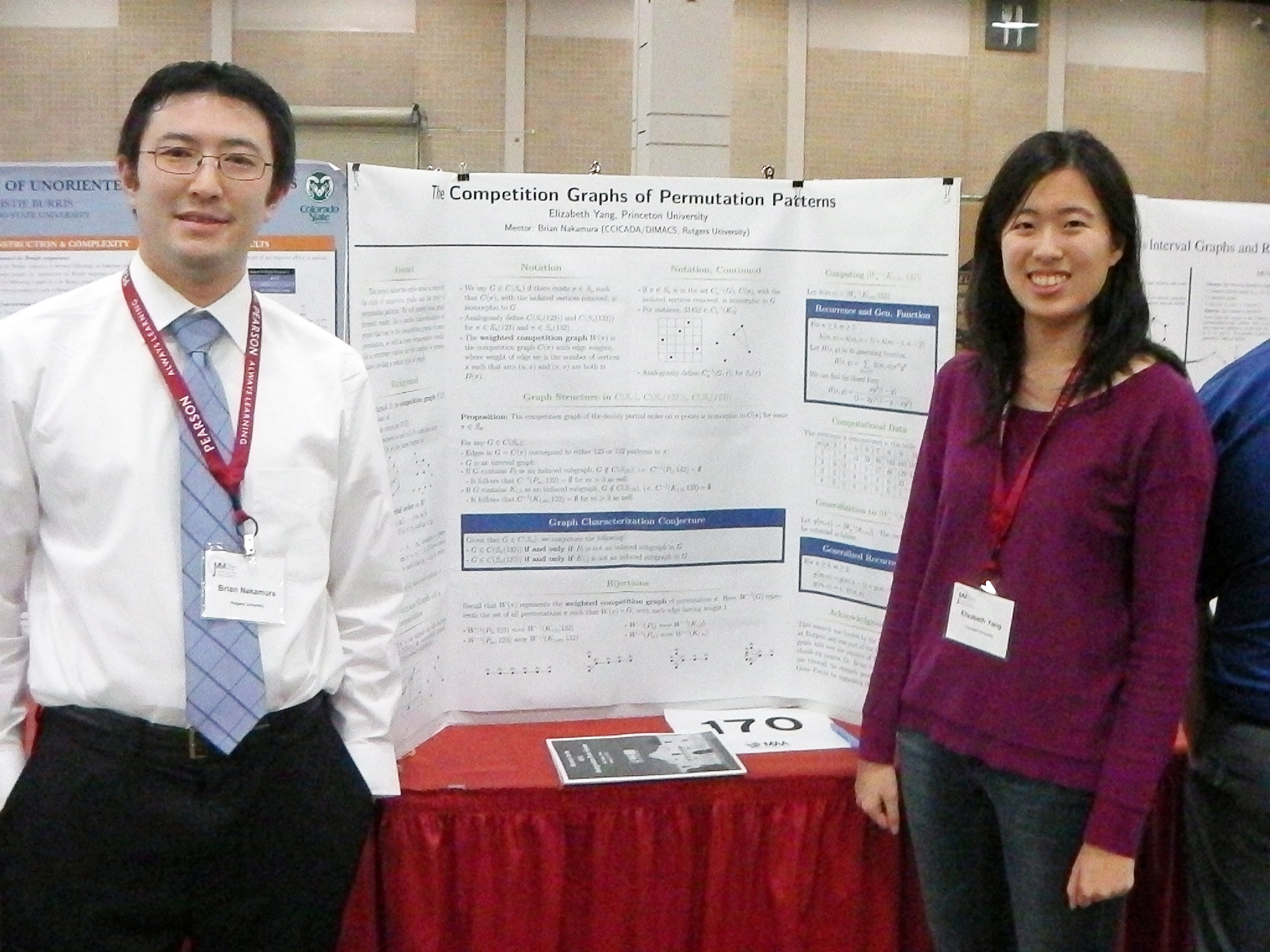 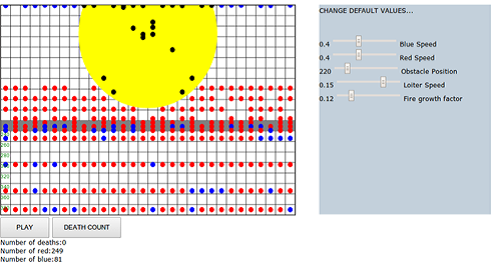 for crowd control during emergencies. They developed their simulation based on a real incident at the Bradford City soccer stadium in 1985 that resulted in 56 deaths and more than 200 injuries. In what became the worst fire disaster in English soccer history, a small blaze turned into a panic-inducing inferno in less than three minutes. The simulation that Thapaliya and Ricks developed is envisioned as a tool to help planners understand the dynamics of a crowd during a panic situation. It enables them to explore the effect of factors such as: the location of fire and how fast it spreads; the location of obstacles and how quickly they can be surmounted; and the speed of pedestrian movement. A screen shot from their simulation is shown at left. On the left side, an animation shows the movement of people represented by red, blue, and black dots. The red dots represent people who always make good decisions; the blue are people who sometimes make mistakes; and the black dots represent people who have perished in the fire represented by the yellow disc. The gray bar represents a barrier that was present at Bradford and prominent in film and interviews about the fire. Simulations revealed that although the position of the obstacle had an impact on survival rate, its affect was not nearly as large as expected. 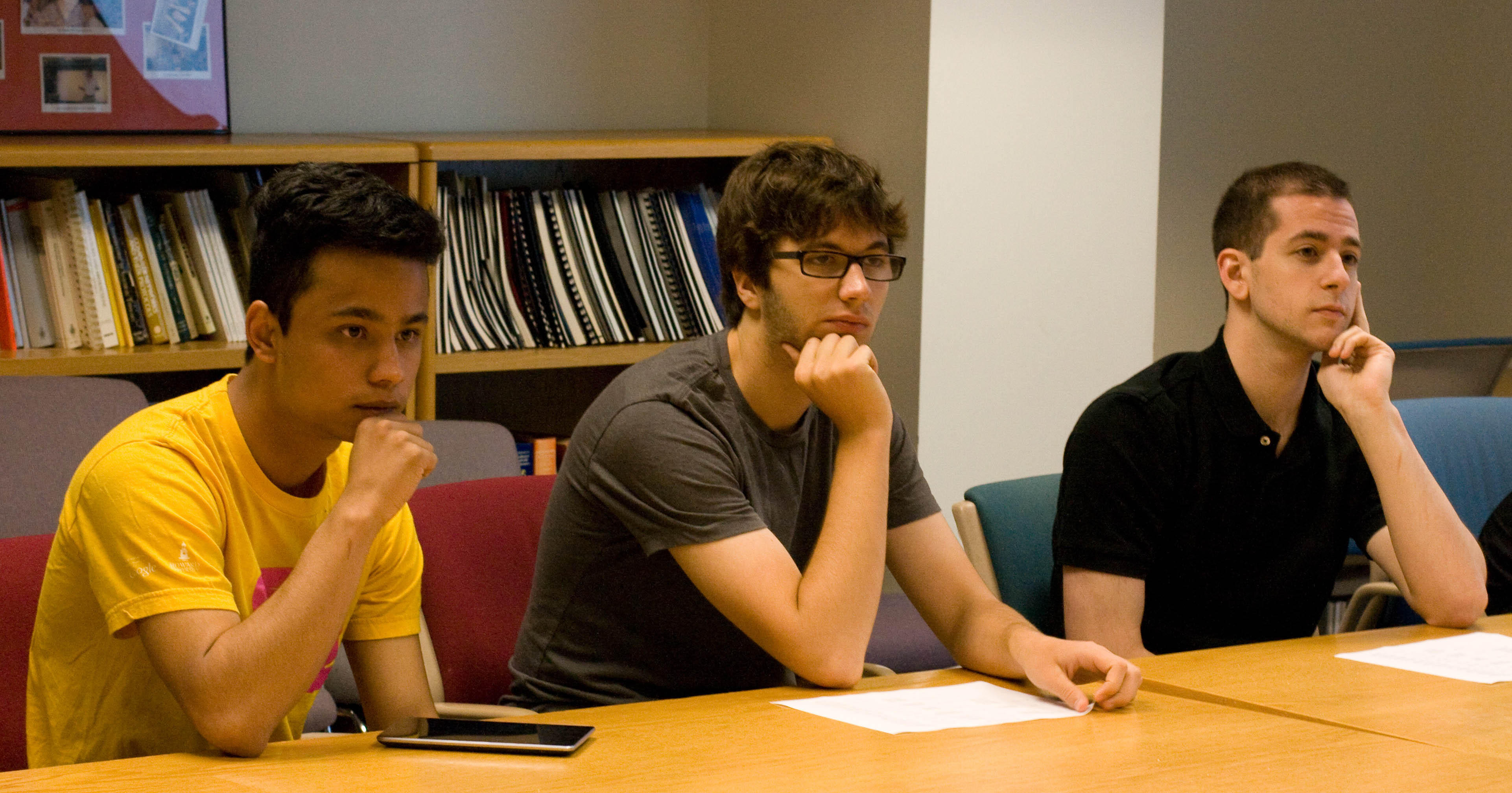 computational cost. In an effort to better predict when it is advantageous to invest the additional computational effort in using HONB, the students and their mentors tested whether there is a correlation between the degree to which the data follow a Zipf distribution and the performance of HONB. In Zipf-distributed data, the frequency of any value is inversely proportional to its rank in the frequency table. It has been observed that natural language data can often approximated with a Zipf distribution. Behe, Wheeler, and other members of their research team looked at seven different real-world data sets – both text and microtext – whose features were character substrings of length n (called n-grams). In tests with multiple values of n and multiple sizes of feature sets for each data set, the team’s initial results suggest that in instances where the Zipfian-ness is increasing but has not yet reached 100%, there does seem to be a correlation with the performance of HONB. Such cases generally involve smaller values of n and smaller feature sets.

Priscilla Lo (Rutgers University) worked with chemistry professor Wilma Olsen and postdoctoral researcher Nicolas Clauvelin in both the 2013 and 2014 DIMACS REU programs. In a forthcoming article in the Journal of Physics: Condensed Matter, they introduce a model and computational framework that make it possible to incorporate detailed structural features of DNA and histones in simulations of short chromatin constructs. Their results reveal a remarkable effect of nucleosome spacing on chromatin flexibility, with small changes in DNA linker length significantly altering the interactions of nucleosomes and the dimensions of the fiber as a whole. In addition, they found that changes in nucleosome positioning influence the statistical properties of long chromatin constructs. They observed that simulated chromatin fibers with the same number of nucleosomes exhibit polymeric behaviors ranging from Gaussian to worm-like, depending upon nucleosome spacing. These findings suggest that the physical and mechanical properties of chromatin can span a wide range of behaviors, depending on nucleosome positioning, and that care must be taken in the choice of models used to interpret the experimental properties of long chromatin fibers.


Printable version of this story: [PDF]