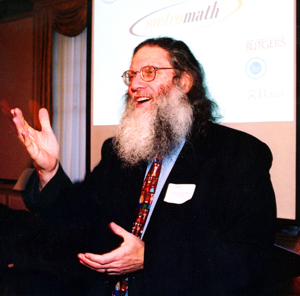 (The photograph was taken at the launch of the in November 2003; it looks like I was directing a performance of the MetroMath anthem, but I was just speaking enthusiastically about the Center's vision and goals.)

In the research portion of my career, I wrote a number of articles and published a research monograph Linear Orderings (Academic Press, 1982) in textbook form.

For over 30 years I have been heavily involved in K-12 education. This came about as a result of my serving as Director of the Undergraduate Program in Mathematics. (Details are in my vita.) In recent years, I have been involved in the following six major kinds of enterprises that are described in more detail below (in the same order):

As a result of this work, and in a few cases as part of the Coalition's public outreach effort, I have prepared a number of articles and presentations on mathematics education.

Most recently, in October 2014, I published Problem Solving and Reasoning with Discrete Mathematics, a textbook intended both for high school students and for college students intending to be K-8 teachers of mathematics, and also for all those interested in and curious about mathematics; it is available for review and purchase at www.new-math-text.com.

I have been very active in the havurah movement, both locally, in the Highland Park Minyan, and nationally, in the National Havurah Committee, which provides a trans-denominational, egalitarian, participatory, communal, and spiritual Jewish alternative. I lead guided meditations on Jewish prayers and psalms, and occasionally publish meditation tapes and write articles on Jewish topics.

My wife Judy and I have five daughters (Mira, Ariela, Dalia, Neshama, and Nessa), and ten grandchildren, the oldest of whom was born in April 2002 and the youngest in October 2014.

Returning now to my activities in mathematics education, here are some details that are associated with the six bullet points above:

An outgrowth of the Leadership Program has been the publication of a book Discrete Mathematics in the Schools, published by the American Mathematical Society and the National Council of Teachers of Mathematics.

These programs for teachers and students are sponsored by the Rutgers Department of Mathematics and the Center for Discrete Mathematics and Theoretical Computer Science (DIMACS); they were formerly sponsored also by the for Mathematics, Science, and Computer Education (CMSCE).


And I have an extensive collection of interesting ties which are available for rental; see catalog for a complete display. In my spare time (?), I like to do word puzzles (not of the logic type), and occasionally create crossword puzzles on Jewish themes.